It’s the Minneapolis Millers at the Toledo Mud Hens, the St. Paul Saints at the Columbus Senators, the KC Blues at the Indianapolis Indians, and the Milwaukee Brewers at the Louisville Colonels, as the American association’s 1904 season gets underway.

The Journal reports that Watkins has been drilling his men in teamwork, and that the team is in good shape for the coming fray. There is speed (of course), and there is pitching. The one weak spot, our reporter admits, might be with the stick. The Millers did not exactly light up the scoreboard during the exhibition season. But our reporter says that Watkins doesn’t much care about results in the spring games; he’s been busy teaching his men the fine points of the game, the placement of their drives, the advancement of the runners, the bunt, the hit-and-run. Watkins doesn’t need a lot of hits, apparently. He will manufacture runs. In half their games this spring, the Millers had more runs than hits. That tells you something right there.

Looking around the league, our reporter says that many are picking Louisville to finish first, and admits that they do look like a good club. Indianapolis also ought to be in the first division without trouble. St. Paul is not so good as last year, when, as you may recall, they were the champions. Milwaukee looks strong. Columbus looks good “on paper” – “but the team contains several men whose presence is not conducive to perfect harmony, notably Yeager of the 1903 Millers.”

(Makes me curious about Yeager and the ’03 Millers. What went on there?)

The Minneapolis club won it’s third victory at Fort Wayne yesterday, 5-3. “Daring base running in the eighth inning, which befuddled the Fort Wayne infield, saved the Millers from defeat.”

But the game is of little note. All eyes are on the future, the regular season. President Watkins has released to the press the opening day lineup (more or less) for the Toledo game on the morrow: 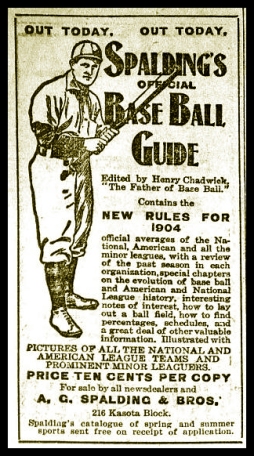 The spring games continue, but you can tell it’s just a formality now, as the team is set and all thoughts are on the approaching regular season, just around the corner. The games that will count. The boys have found some warm weather in Fort Wayne, and maybe they are a fair-weather club, as they’ve taken two straight from the Railroaders of Fort Wayne. Yesterday ol’ Doc Bailey finally came over from Columbus for his first innings of work, and gave up a couple of singles in three innings. The Unknowable Munch did most of the work though, hurling the first six, and the boys won the game 5-2. (They must be playing the full nine, now that they are out of the collegiate competition.) The day before they carried the day 5-4, with the Elongated Stimmel and Model K Ford pitching in the win. For the offense, Sullivan and Fox have been the wand wizards in Fort Wayne.

With the season drawing nigh, and the roster nearly set, I decided it was time to try to find some first names for these guys. Surprising how that doesn’t seem to come up much in these articles. Perhaps it was a more formal time period, where first names were not used except on the good occasions, like fine china. Still, you’d think that the sports page might be a bit less informal.

First, Roach, the back-up catcher. While there have been a lot of mentions of Roach in the Journal, our Scribe has not yet, I don’t think, leaked his first name to the public. Or perhaps the Roach family was simply too poor to afford first names. I checked the minor league rosters and register on baseballreference.com, and there’s a list of about a dozen guys known just as Roach. Helpful. Looking through the newspaper archives, though, I come to the conclusion that our guy is Michael Stephen Roach… based on a reference I spotted  to an M. S. Roach, and another to a Roach playing catcher in Columbus, who’s name, I think, was Mike. And who I think went to play then at Indianapolis, and then came to the Millers. So we’ll go with Michael Stephen until I see something different. No picture yet of Mr. Roach.

My second challenge was the Mysterious Munch. Not so many anonymous Munches in the register, but also nobody listed that seemed likely. I saw a few newspaper references to an A. Munch at about this time period, a pitcher, and then also to a left-handed pitcher in Chicago named Gus Munch. I suspect that would be short for Augustus, and so I think that’s our guy, Gus Munch. Again, till I find out different. 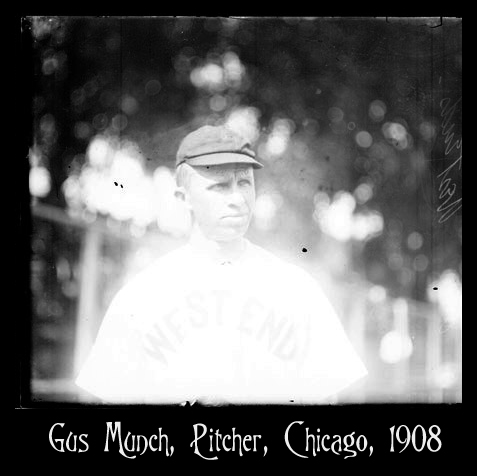 The Millers win another from the college boys, a loosely played affair that finishes 10-3. The weather is good for a change, and this must have thrown everyone off their game, the pitchers particularly. The seldom-used Stimmel was the hurler for the Minneapolitans. He is known as “the Pelican,” – and I guess I do see a resemblance – and our journalist says that yesterday he was occasionally effective, but wild. Seems like he might have worded that the other way around? But, either way, the Pelican gets his first win of the spring. Ford also tossed a few innings, and was also occasionally effective, but wild.

Meanwhile the battsmen are playing Watkins style of baseball:

“A feature of the game was the manner in which the Millers placed their hits. Whenever there was a chance to draw a man out of his position it was done, and then a Minneapolis batter would send the ball over the uncovered  ground for a single.”

Sullivan was injured in the fifth, sliding into third base, knocked unconscious. They finally needed to take him out of the game (presumably after he came to…) but they also think it likely that he’ll play tomorrow. Katoll’s arm is fine.

This makes three straight wins over the youth of Illinois, and the games sound like they were not very good. Perhaps everyone has lost interest? The Minneapolis boys are breaking camp, moving on. They’ll leave early Saturday morning, by train, I imagine, for Fort Wayne, were they will play four games, Saturday – Tuesday. Then they head to Toledo, for the opening game of the American Association season.

Thursday evening baseball news… Well, the Millers won 6-4 yesterday, a game described as “listless” by our reporter, who perhaps had other things in mind when he found out he was going to cover spring training. Yes, it’s another cold day, and windy too, and the batters had some fun with that. Coulter hit a home run and a couple of singles, going 3 for 3. With the cold weather the pitchers “used little speed” and relied on the fielders to make the outs. (That’s their story, anyway…)  Frosty Thomas started and went four, giving up a run. The Magnificent Munch finished up, gave up two runs in the fifth and one in the seventh. (Let down by his fielders, perhaps.) Our reporter says that Munch pitched “very clever ball.”

“Munch has a peculiar motion, which holds the runner very close to first base. He is also in the game at all stages, and he takes every advantage of a batter’s weakness.”

Thomas apparently was not as clever, yet still somehow managed to get the other guys out. They only played seven innings, and it looks like Katoll was in the game long enough to get hit by a pitch. I’m confident his arm is fine, though. I’ve stopped worry about Katoll’s arm. It seems to be as good as new. Spring training seems like it’s gone on long enough, the road trip that never ends.

In other news, the Japanese are beating the Russians at Port Arthur. The Russian fleet has met disaster. Not much else going on. Snow and rain in Minnesota, with a high of 44 and a low of 24. Lawn Kimonos are on sale at the Minneapolis Dry Goods store. Pretty good price.

And it looks like the Regal Shoe Store has got a tube of Radium to put on display. What will they think of next?

The NY Times has a nice obit here.

Connie was the Oldest Living Ballplayer, which we noted earlier in this blog. That title now goes to Mike Sandlock, 98, born October 17, 1915. 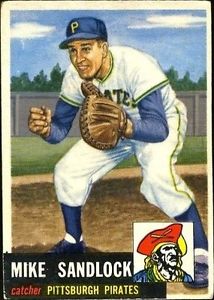 Looking at Wikipedia’s list of Oldest Living Ballplayers, I see a few names of note. Bobby Doerr is working his way up the list, as is Monte Irvin and Al Dark. I was surprised to see Sam Mele, former Twins manager, also on the list; Mele’s got a classic old baseball card, recently acquired for The Collection.

Anyway, Connie’s gone, the circle-change of life goes on. Ballplayers go up to the plate, take their swings, and then grab some bench. Those moments at bat are fleeting, brief. So pay attention out there. Take your best swings.