Okay, not that we ever stopped.

I’m usually about a year behind the times (at best), so it’s not surprising that I just came across this little video for the Twins Community Fund.

No action today; rain all around the association.

Given a spare moment, an industrious scribe will analyze, and so our scribe does.

The millers, he sez,  have been “larruping” the ball – over ten and a half hits per game, which is a lot more than anyone would have predicted.

(Of course, too early to tell.)

Most of the fielding errors we’ve seen so far are on account of the weather, he sez — numbed fingers making it difficult to hang onto the ball.

Also: these boys are as fast as lightning.

Also: Captain Fox was confined to bed yesterday, but is expected to play today.

“Change of water was responsible for his indisposition.”

So the Twins have finally taken my advice — or at least the most expensive part of it – and signed Ervin Santana to pitch for them next year. With Danny Santana at shortstop (or center field,) we are only one short, easy, inexpensive step away from seeing Los Tres Santanas. And the last I heard (an internet search mere seconds ago) The Original Johan is still out there, a free agent, ripe for the plucking.

Looks like The Original Johan is planning on pitching in the Venezuelan Winter League this January, working on his comeback from a torn Achilles tendon. If he does okay down there in Venezuela, I won’t be surprised to see him in spring training with the Twins. Because the Twins are crazy for veterans with moxie and can-do attitude (see: Hunter, Torii.) (Add “damaged goods” and “inexpensive gamble” into the mix…)

Is Every Day Eddie Guardado available?

How about Senor Smoke, Juan Beranguer?

Who’d you rather see at first base this year, Justin (.319) Morneau or Joe Mauer?

Put Trevor Plouffe back in the outfield?

Ahhhhh. Hot stove league. The snow is blowing out there, but in here there’s a little taste of summer going on.

No Sunday paper, so we wait till Monday to get results of both Saturday and Sunday’s games.

On Saturday, the millers whupped the mudhens again, 8-7. Baily was pitching and was hit hard, eventually being relieved by Owens. The millers kept plugging away at Reisling, and won it by scoring one in the eighth to knot it up and one in the ninth for the win.

The BIG shocker of the report, which is a very small report, being “yesterday’s game” – “Demontreville is said to be slated for the axe by Watkins.”

Okay, I know he’s been hurt, but it looks like he played on Saturday, and got a hit (and, okay, made an error.) It seemed like Demontreville was locked in! Slated for the Axe? He showed all the signs of being a very very clever third baseman! perhaps his arm trouble is worse than we’d been led to believe. It makes me wonder about that whole “water polo” story. Seriously? Is that still their story? Has Watkins got someone waiting in the wings? It seems like McNichols might be the new third baseman. But I suppose we should wait and see; perhaps this is just a rumor latched onto by a desperate reporter.

Oh, it looks like Fox pasted one during the game, a three run shot that put the boys up in the second, 5-2. Baily couldn’t hold the lead, but who says these boys can’t hit?

The score stood 7-2 in favor of the millers in the fifth, when the rain came pouring down, and Umpire Holiday called the game. Frosty Thomas pitched well for the Minneapolitans. Watkins protested, but the game will be played over. The millers will still get half of the gate, so perhaps a moral victory.

Other News Around Town

Well, the Prunes are in: 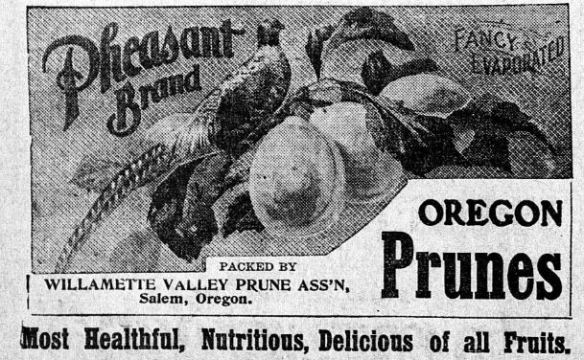 Also, just like today, 1904 Minneapolis has its gang problem:

I feel a bit remiss, leaving the Millers languishing for so long at 1-1. I seem to recall that I was aiming at covering the year in a year, and for awhile, back in the spring, I was all up to date. Then life intervened, and then it was 26 September when last we heard from them, losing to the Mudhens, the vaunted Munch getting hammered in his Very First Game, when we were counting on him so much. I’m sure you have all been on the edge of your collective seats, wondering which way this would go. The beginning of the long slide down? Or the continuation of the hubris of spring?

Well, good news, all. The boys rebounded the next day, behind the sterling twirling of The Elongated Stimmel. The final score was 7-1. Archibald gave up only 3 hits and no walks, going the distance. “He had great speed and used every kind of curve known to twirlers.” It was a tight 1-1 game in the fifth, but then Coulter came up with the bases loaded and “…the big fielder landed hard on a lob and sent the horsehide out to the centerfield bleachers. Everybody romped home before the ball was fielded in.” An inside the park home run, and that was pretty much all she wrote, especially the way the tall narrow Stimmel was throwing the bean. Coulter also got a double and a single, McNichol started at third for Demontreville and got three hits, and Leslie, starting at catcher again, also went 3 for 4. (Who is this Leslie guy?) It was a hit parade. But top honors go to Mr. Stimmel for totally stifling the Mudhens, leading the Millers to a 2-1 record.

Well, with two full games played, there’s a front page article in the 23 April sports section: “Too Early to Size Up Teams.” Thanks, Captain Obvious.

“Until the team has played the rest of its eastern games, however, it will be impossible to make any accurate predictions in regard to its finish. In fact, the team will not have a fair test until it reaches Minneapolis, and has played a few games on its own ground.”

Nice of them to let us know that it’s too early to know. It says that the eastern writers are all giving credit to the Millers for playing “a scrappy, gingery game.” Well, that’s what we want to see.

The writer then goes on to say that the Millers look weak with the stick, not that any conclusions can be drawn after only two games. But they still look weak with the stick. Watkins says it’s hard to get a good hitting club in the minors as the good hitters are quickly snapped up by the majors. His thinking is that a team that is fast and with strong pitchers, and fair hitting support, has more chance of winning than a team of hitters who are deficient in base running, fielding and team work. Well, we shall see about that, I guess. We shall see.

One thing is for certain: it’s too early to tell anything for certain.

Another thing, though, that is certain, is that Watkins has assembled a very fast club. Will they be fast enough???

In fact, former Miller pitcher Guy Converse is in town, having just been released by Winnipeg, and being picked up by the St. Paul club. “That is the fastest bunch I ever saw,” Converse reports. Manager Egan of the Winnipeg club agrees, saying that the average first division club has two or three fast men, but Watkins has six who are sprinters, and good ball players besides. “Sullivan, Maloney, Coulter, Fox, Oyler, and Demontreville ought to simply burn up the paths this season. I do not see how Watkins can help landing well up in the race.”