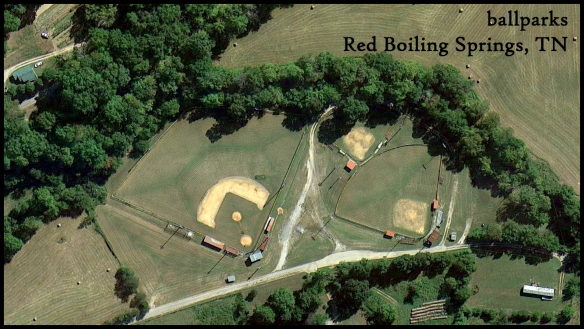 Well, the rain continues in April of 1904, and yesterday’s scheduled game was a washout. Our scribe had thought that the millers would take two games in Columbus, but instead they drop one and are rained out of their other three opportunities. The club boarded the train last night for Louisville, where they will play a four-game series against the colonels. It looks like the colonels dropped yesterday’s game against Kansas City. (Oddly, the game was played in Louisville, but KC batted on the bottom of the card. So, really, they were the home club, it seems. Perhaps we’ll find out more about this later. Does KC not have a park? Are they like the fabled Rupert Mundy’s, wandering in the wilderness?)

The speed of Watkins’ men continues to astound all who witness their ambulatory talents. Apparently they excel at the bunt game — “…the slightest bobble by a senator on an infield hit meant that the runner would reach first.” I imagine other teams must be quite nervous about these millers and their short-ball style of play. Veritable gazelles. The entire game played with the infield pulled in, guarding against the bunt. “The Minneapolis Shift.”

If this pennant chase comes down to a footrace, the boys quite have it all locked up.

This new catcher Weaver is apparently as tall as the team is fast. He stands well over six feet, a veritable towering Goliath of his day. This now means Watkins has four catchers on the club — Weaver, Leslie, Ludwig, and Roach, and our reporter hazards a guess that Ludwig and Roach are slated for Watkins’ bloody chopping block.

Four backstops are probably too many, but I do hope he keeps Ludwig, who showed some pluck in spring training. Watkins famously said he was going to instruct him in “all the finer points of the game.” I’m sure Ludwig was kidded about that quite a bit. Did Ludwig turn out to be a poor student, or was Watkins just talking a good game? Well, we’ll probably never know.

Frankly, I would not be at all surprised if the club picked up another new catcher in Louisville in the next day or two. Watkins seems to have some sort of weird obsession with the position. It seems like there’s always someone better waiting in the wings. Tomorrow perhaps we’ll hear about catcher Slumhaggen, a seven-footer who can run like a jaguar and is a wand master of the highest degree. If I was catcher Weaver or catcher Leslie, I would not be feeling too comfortable.

Perhaps you’re wondering about the standings? Especially given the extended lay-off between our visits to 1904. Our last visit being, (embarrassingly) in November of 2015. 2015? Yes, 2015. My apologies.

Well, keep in mind that it’s early yet, and far, far too early to make any serious prognostications about future success. Especially given the amount of rain we’ve been having. But here’s the scoop: 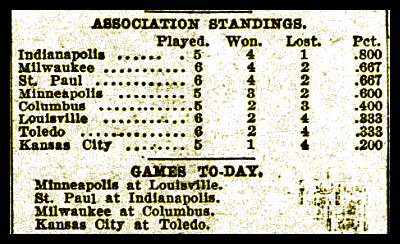 Tomorrow we’ll find out how we fared against those colonels in Louisville.

With baseball season just right around the corner, I’ve

picked up a copy of Diamonds Are Forever at my local pre-owned book retailer. This is a good-sized book published in 1987 by the Smithsonian Institute, 159 pages full of baseball art and stories about the game we love.

The writing is mostly excerpts from longer works. Writers include John Updike, (“Hub Fans Bid Kid Adieu,”) Carl Sandburg, Ernest Hemingway, Roger Angell, Thomas Boswell, W.P. Kinsella, William Kennedy, Donald Hall, Steven King, and more. I hope Philip Roth is in there, but I haven’t spotted him yet. (Which reminds me, perhaps it’s time I re-read his The Great American Novel again. It’s been a good long while.)

I really bought this book for the art. Some of these are familiar, and some I’ve never seen before. I loved this picture, to the left, of Irish playwright Samuel Beckett going toe-to-toe with an umpire. A lot of people don’t know that Beckett managed the White Sox for a few years back in the late 40s. Those were very dramatic years for the White Sox, though they didn’t win a lot of games. They were more focused on illuminating the tragi-comic nature of the human condition, by means of a legendary gamut of absurdist plays. One of the most well-known of these was the play of second-baseman Sonny Godot, who would take the cut-off throw from the outfield, but then keep the ball in his glove, pretending that he didn’t have it, though the whole crowd knew it was there. All the opposing runners would round the bases and score. Even though he did this every time, he continued to get cut-off throws, game after game. This was baseball for the thinking fan, the deeply thinking and ruminative fan, and, thus, the White Sox did not draw so well in those years. Which was just the way Beckett liked it. “The end is in the beginning and yet you go on,” he would say to the baseball reporters. In the end, a lot of the White Sox fans complained that they no longer understood the point of the game, and eventually Mr. Beckett got canned, which is the fate of all of us. Beckett-ball had its brief moment in the sun, and then that was it, back to Paris for Mr. Beckett. He never managed a professional club again, and, in his later years, denied that he had ever managed at all.

Anyway, back to the book. What’s not to like? Classic baseball prose. Any kind of baseball art you can think of. And it’s springtime. What could be better? Play ball, already.

…as Halsey Hall used to say.

Did you know that Halsey used “Holy Cow” in his Home Run call long before Harry Caray used it?

Yes, Halsey originated the “Holy Cow!” exclamation. Credit where credit is due.

My favorite story about ol’ Halsey is the time in 1968 that he set the press box on fire with ashes from one of his big cigars.

I was lucky to grow up listing to the Twins games on the radio, summer after summer, Herb Carneal, Halsey Hall, and of course, Hamm’s, the beer that refreshes. 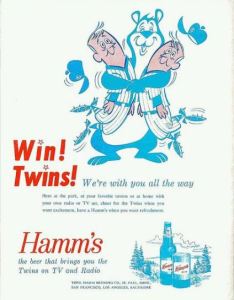 There’s a nice little write up about Halsey on the Society for American Baseball Research website. Good stories? Holy cow! In fact, the local SABR chapter is the Halsey Hall chapter. I wonder if they could add Herb Carneal into the name? Check out their February 2017 newsletter for a nice “Who Lived Here” trivia question.

Anyway: Pitchers and Catchers report. Spring is here. At last.